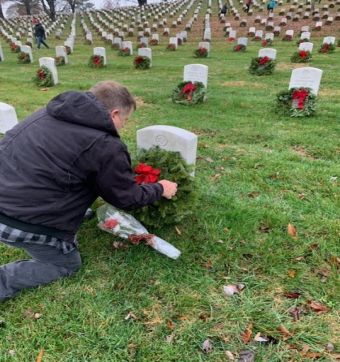 As part of its ongoing recognition and support of veterans, Hunt Military Communities volunteered this past weekend with the non-profit organization Wreaths Across America to support their wreath-laying efforts at multiple military cemeteries across the nation.

Twelve of our communities and employees from Washington to Virginia gathered to participate in the annual program which is responsible for placing over 2.2 million veterans’ wreaths on the headstones of our nation's heroes. With more than 50 percent of employees being veterans or having some tie to the military community, Hunt Military Communities understands the difficulties families of fallen heroes may experience during the holidays and is happy to provide support in any way that it can.

At Arlington National Cemetery, employees of Bolling, Langley, Fort Lee, and Arnold Family Housing joined with over 38,000 volunteers who placed 240,000 wreaths. Thomas Bentley, a Community Director from Arnold Family Housing in Tennessee, took part in the event and noted, “It was a trip of a lifetime and I was so honored to be a part of the day.”

This year, 600 truckloads of wreaths were transported across the country through a network of volunteer drivers, donated trucking services, and countless hours of dedicated volunteers committed to the mission to remember the fallen, honor those that serve and their families and teach the next generation the value of freedom.

Each live, balsam wreath is a gift of respect and appreciation, donated by a private citizen or organization and placed on the graves of veterans by volunteers as a small gesture of gratitude for the freedoms Americans enjoy. For centuries, fresh evergreens have been used as a symbol of honor and have served as a living tribute renewed annually. Wreaths Across America believes the tradition represents a living memorial that honors veterans, active-duty military and their families. Volunteers are asked to say the name of the veteran out loud when placing a wreath to ensure their memory lives on.

Hunt Military Communities takes pride in not only serving our residents who live within our communities but also honoring those who served our country. “It is inspiring to see the commitment of those in our community and our many employees who took time to honor our fallen heroes during this holiday season,” said John Ehle, president of Hunt Military Communities. “As we honor and remember those selfless veterans, we are reminded of the sacrifices they made to defend our freedom. We will continue to support this most worthwhile organization annually.”

National Wreaths Across America Day is a free event and open to all people. For more information, visit www.wreathsacrossamerica.org.

Hunt's Military Communities division is a 50-year partnership created between the Department of Defense and Hunt through the Military Housing Privatization Act. As part of the partnership, Hunt owns approximately 52,000 units spread across more than 40 military installations on Navy, Air Force, Marine Corps, and Army installations and is the largest privatized military housing developer in the nation. For more information, visit www.huntmilitarycommunities.com.

About Wreaths Across America

Wreaths Across America is a 501(c)(3) nonprofit organization founded to continue and expand the annual wreath-laying ceremony at Arlington National Cemetery begun by Maine businessman Morrill Worcester in 1992. The organization's mission – Remember, Honor, Teach – is carried out in part each year by coordinating wreath-laying ceremonies in December at Arlington, as well as at more than 2,000 cemeteries and other locations in all 50 states and beyond.

As a Hunt employee, you will be helping our organization build value—and as your employer, we'll be committed to helping you build value, both personally and professionally. If you are talented, energetic, and customer-service oriented let's chat!